Lynette Stokies's wedding dress looked so good you could eat it - and her guests did just that. But it wasn't the bride's actual gown they chowed down on. 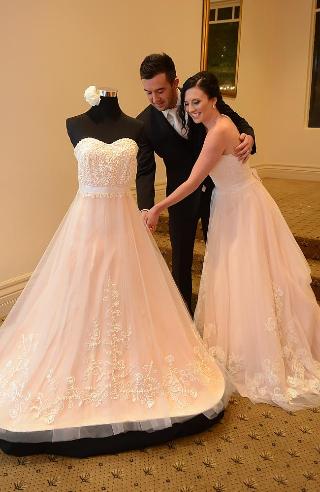 Ms Stokie's friend and baker extraordinaire Belinda Hibbert made a 9 layer chocolate mud cake copy of the dress for the 27-year-old and her new husband, Johnny.

The masterpiece was made to scale, weighing in a whopping 60kg, and was so accurate guests at the August wedding thought it was the bride's back-up dress.

It was covered in 8kg of icing and airbrushed with apricot colouring to match Ms Stokie's gown.

Most of the cake was edible - all but the bust and the tulle material draped over the skirt.

Ms Stokie said the creation tasted as good as it looked.

Ms Hibbert said it took her about a week to make and she put up to 18 hours of work in each day in her "cake studio" - her Pakenham kitchen.

"I knew it was going to be a challenge, but I enjoyed it," she said.

The baker said delivering the mammoth cake was as stressful as making it. 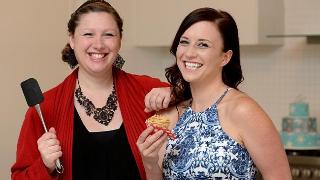 Three people were needed to lift the treat into a lined van, where it was tied down by its base. It was then driven almost an hour to the wedding venue - Tatra Receptions in the Dandenong Ranges - where the four groomsmen we waiting to carry it inside.

Ms Stokie said she was blown away: "It's overwhelming to think somebody would put so many hours into something just for my wedding."

To inquire about ordering a cake from Belinda, email: [email protected]

Its Time to Make a Change in the Cake World

New Member Tutorials and a Peek Behind the Scenes!

Prepare to have your mind blown with this sugar art collaboration brought to you by 31 of New Zealand’s Cake Decorators & Sugar Artists, celebrating the amazing films of Sir Peter Jackson.From Gollum toLead by Mel Todd and her admin team; Jo Orr, Nina Blackburn & Zeena Bode​​To see more of these amazing works from a team of very talented ...