0 comments
Girl With Cake"Everyone should feel the love of a specially baked cake."

Every so often someone jumps into your sphere with a smile that lights up the world. When that happens, you can't help but want to know a little more. You want to look a little closer and see just who this person is who seems to be radiating enough light to make the world a better place.

I came across 26-year-old Nerine Gardiner a few months ago on Instagram and given that cake is kinda my thing, I jumped into take a closer look.Now I see a

cake pages.....and I mean alot, so what was different about this one?Nerine captivated me, not just with her smile but what she is doing and the energy and light that she putting out there in the world.You see, Nerine bakes cakes for strangers. That's right. She bakes cakes and just gives them away! But I'll let her explain all of that.....

1. How did it all start? What made you decide to give the first cake?It's quite a long story. I guess I lost my faith in people after a bad experience. A few months later I ran into my ex-creative director and told him what had happened, and that I felt like all people are probably just bad. He told me that if you stop seeing the good in people, you lose the ability to be good yourself. A few months went by where I tried to look for good things and tried to think of a way that I could do good too. At one stage, I just felt so overwhelmed by bad news stories, etc that I finally just decided to do something to try to fight all the negativity. So, I baked a beautiful cake, the way I would for my best friend. But I gave it to a homeless person on the street instead.I grew up in a family where cake is love - you bake for someone to show them you love them. That was my intention. And I started writing about it because I wanted to encourage others to give of themselves unconditionally and to show them that they're not alone in wanting good things for the world.

2. Were you nervous when you gave the first cake? Did you know what sort of reaction you would get?I had no idea what to expect. I was so nervous, all the words I'd planned to say flew out of my head and I ended up handing them the cake, saying nothing. My hands were shaking and my heart was fluttering, and the feeling didn't go away for long afterwards. 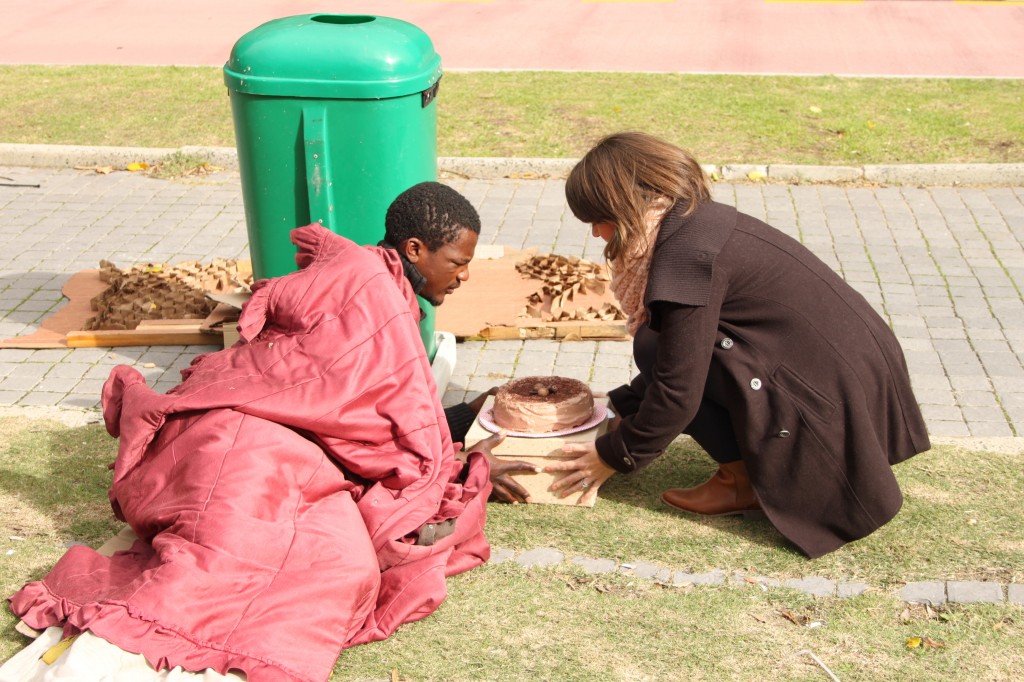 3. For readers not familiar with the area that you give cakes in, tell us a little bit about it. Is there a lot of homelessness and poverty?I live in Cape Town, South Africa. South Africa is a beautiful country, but so many people are struggling and many parents are supporting their families with less than R3000 a month (that's about $281). There are so many people who are barely scraping by, coupled with a rise in violent crimes and a government that's constantly in the news for corruption, spirits can get quite low. 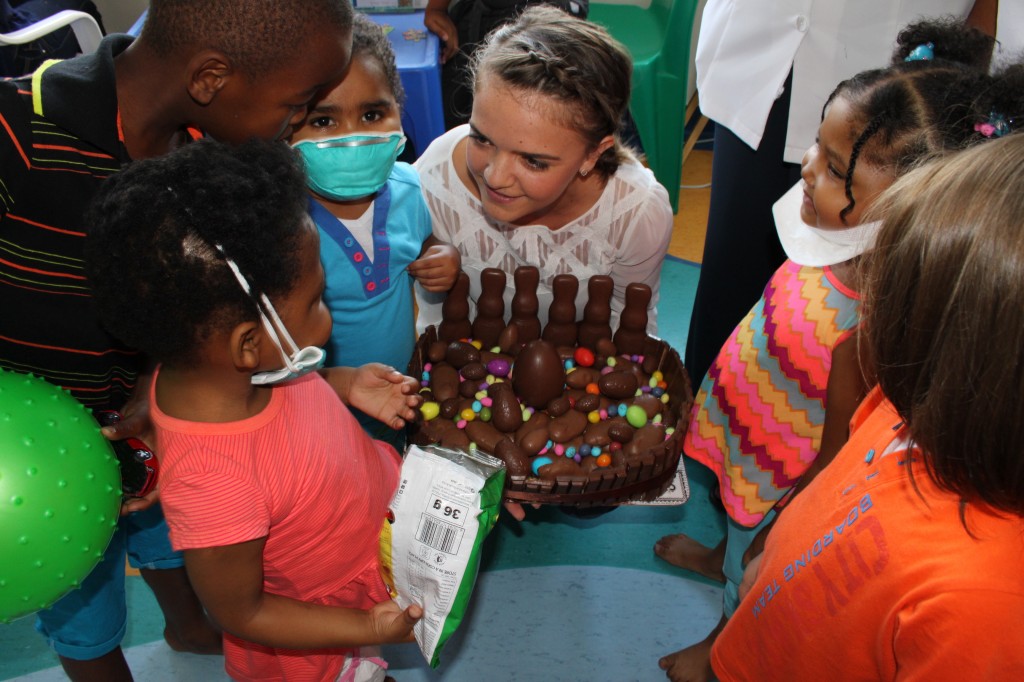 4. Tell me the process that you go through when you take your cake out to give it to someone? What influences your decision in who you give the cake to?

I usually bake over two nights because I work full time (and often overtime). So I'll bake the cake one night and ice it the next. Sometimes I'll decide beforehand that I'm giving it to specific petrol attendants or security guards, or I'll plan a trip to a children's hospital. Most of the time I'll just get in my car and drive around until the right person pops up. It's a strange thing - looking for someone to give a cake to. Because a part of me wants to give it to everyone, but there's always a part that believes the right person will stand out. And that usually ends up being the case. Something usually happens that makes someone stick out. Hard to explain, but I feel like it isn't really in my control.

5. How does it make you feel to see the reactions of those who receive your cakes?I've kind of learnt to be happy with no reaction at all, because giving really should be all about the recipient. But each individual reaction has had its own unique effect on me. Whether it's a beautiful thank you; a look of skepticism; shock and surprise; or nothing. In that moment, you're so focused on the person you're giving the cake to, that his/her reaction almost lets you into their head a little bit. And most of the people who receive cakes are people I would never otherwise have met, so I've learnt a great deal about empathy. 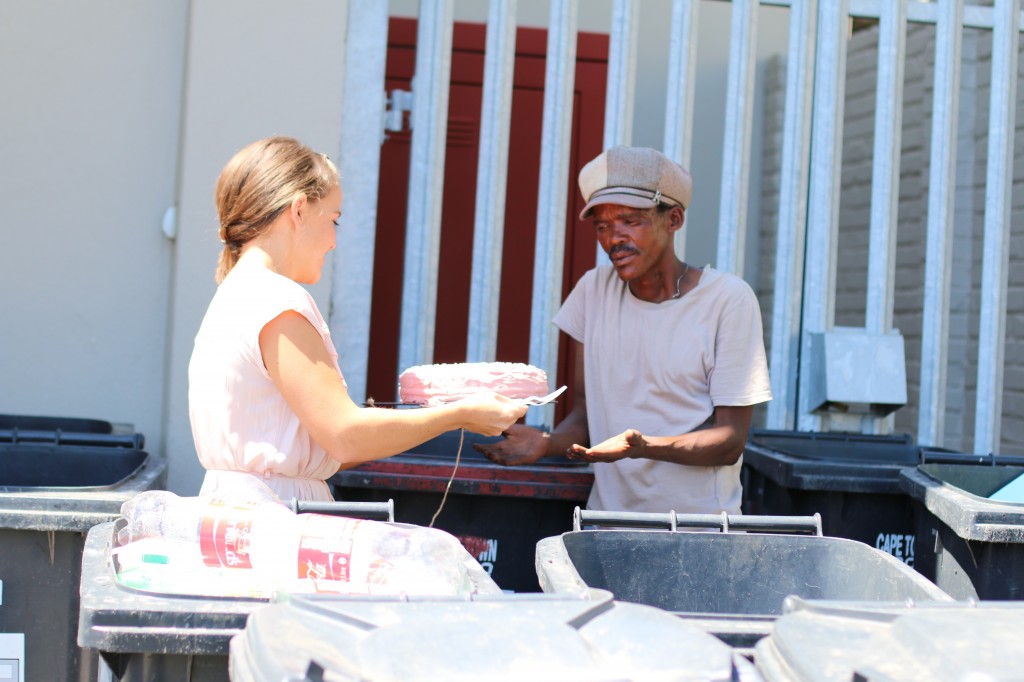 6. What do you see for the future of Girl with Cake?This is such a difficult question... I don't actually know. I definitely want to keep encouraging people to reach out in their communities, whether through cake or something else they can do or make. For now I'm playing it by ear, growing where I see possibilities. Who knows what will pop up next?

I think for so many of us who love to bake the best part is watching other people devour our baked creations. I know for me, I love to see that look of pleasure that fills someones face, the smile that slowly warms their face and the quick wipe across their mouth as they remove that forgotten crumb and smidgen of cream. I can feel it when someone can taste the love that has gone into cake that I have baked for them. Perhaps then somehow, baking brings a little bit of light to us all.If you haven't already make sure you head over and check out Nerine's blog

and if you want to help......perhaps bake a cake for a stranger in your city this weekendFollow Nerine on

How To Make an Aeroplane Cake with Learn Cake Decorating Online

Almond and Pecan Coffee Crumble CakeExtract from our new book "For The Love of Cake" This cake is the perfect dessert or afternoon tea cake. Not too sweet but just perfect with a coffee; or perhaps live on the edge and serve with my Sake Espresso. This cake has just the right amount of textural crumble to contrast with the sublime moist coffee cake ...