Don’t You DARE to Touch My Cake!

This adorable puppy thinks she is entitled to have that cake. Yes. ALL of it. She gets absolutely outraged about her dad trying to touch her cake. To be completely honest... we kind of can relate, right?

The video is showing a doggy, - probably a jack russel - growling at the hand reaching out to a cake with an index finger pointed out. She gets even more outraged when the finger then dips into the cake and turns at her. At this point I have to admit I feared for the safety of that finger. As the finger approaches the scary teeth the growling intensifies... Surprisingly, when the finger covered in chocolate cream filling eventually touches her lips, the doggo from hell turns into a tame cutie and licks the cream from the finger, only to transform back into a killer a moment later.

While humans primarily use their voice to communicate, dogs mainly rely on body language when trying to tell us - and each other - what is going on with them. When trying to decode dog communication and body language it's important to observe the entire dog along with the situation. 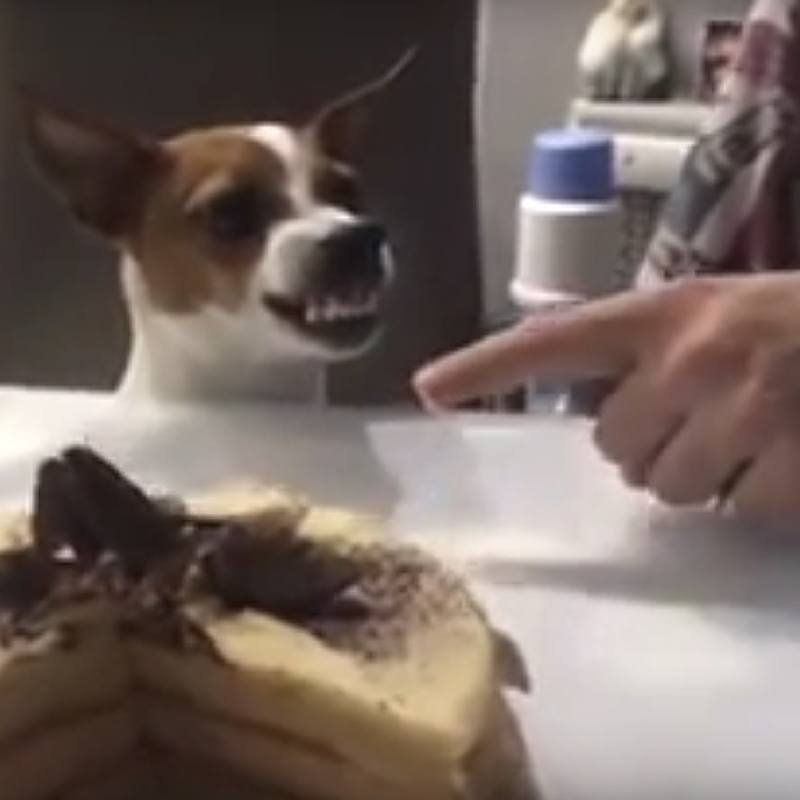 The cake in the video looks like a yummy tiramisu cake. This typical Italian delicacy is based on sponge cake soaking in coffee and covered in mascarpone-based cream.

Got Inspired by the Chewbacca Mask Mom? Make a Chewbacca Cake!

I'm sure you have seen the Chewbacca Mom video these Chewbacca cakes are inspired by.Whether you think it's funny or cringeworthy one thing is certain: buying YOURSELF a Chewbacca mask is pretty cool. :) Even if you are not particularly a fan of the Chewbacca lady you can be sure that there are 114 MILLION people out there who think her video is ...

No images found!
Try some other hashtag or username
There are some problems with the configuration of the opt-in widget